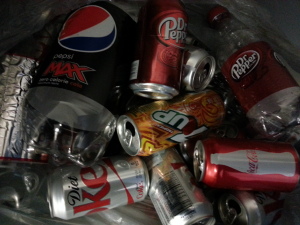 Voters in Berkeley, California approved a controversial “sin” tax on sugary soft drinks last month, but Iowans may not realize Iowa is one of about 20 states that already tax soda pop.

“You don’t see it unless you pay attention to your grocery bill,” John Beghin, an Iowa State University economist, says. “We don’t have a sales tax on foods in Iowa, but the sales tax applies to soft drinks, so in a sense, we have an implicit soda tax in Iowa.”

The state’s six percent sales tax is charged on bottles and cans of soda pop. far less than the “sin” state taxes charged on alcohol and tobacco products purchased in Iowa. Policymakers in Iowa have argued significant increases in the taxes on cigarettes, for example, will help curb smoking.

There is now a stigma attached to smoking, because of the cancer risk — making it easy for policymakers to hike taxes by a dollar-per-pack, but Beghin says increasing taxes on high-calorie sodas may increase awareness of the health issues associated with obesity. “We need to start somewhere signaling to people that the current lifestyle is not that healthy,” Beghin says. “The soda tax may not be the best idea, but maybe a mild reminder you shouldn’t overconsume those products.”

Berkeley, California’s “sin” tax on soda is a penny per ounce and it applies to syrups added to coffee as well as soft drinks. Diet cola is not subject to the city’s tax. Iowans, by the way, will consume 136 million gallons of soft drinks this year.