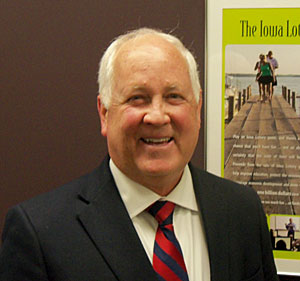 Rich says there are a couple of reasons for the increase in sales. “Scratch tickets are local. People during the holidays like to give them as gifts and also gas prices have been coming down and that means discretionary income when someone goes to or convenience store (they are) able to have a little extra money for bottle of pop or scratch ticket,” Rich explains.

“As we look through the first five months, the Iowa Lottery is right on target and ahead of our five-year average and right on budget — even in somewhat a soft economy for the state in general,” Rich says. “And again, I think it’s part of the convenience and the low price. For a couple of bucks you can have some fun with a lottery ticket.” The budget projection for this fiscal year is $68.7 million dollars.

The Monopoly Millionaires’ Club is a $5 ticket that began selling on October 19th. The Iowa Lottery says around $409,000 worth of the tickets were sold in October and November.