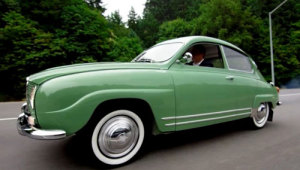 Tom Donney’s Saab that he loaned to Seinfeld.

The latest episode of comedian Jerry Seinfeld’s internet-based TV show prominently features a vintage car owned by a central Iowa man. Tom Donney, of Fort Dodge, is a car collector and got a surprise call from the producers of “Comedians In Cars Getting Coffee.”

Donney says they wanted a very particular kind of vehicle for a show being shot in Portland, Oregon, and he had just what they needed. “They wanted a two-stroke Saab, rather than say a four-stroke, which most modern vehicles are, and it had to be in the mid ’60s as far as a year,” Donney says. “We just happened to have a car here in our showroom and were able to work things out.”

The vehicle is a rare 1965 Saab that’s known as a “96 Monte Carlo 850,” but it’s not to be confused with a Chevy Monte Carlo. Donney says he delivered the olive green car himself to the show’s producers in Portland. The show’s two previous borrowed vehicles had broken down and Donney says he had his concerns.

“Portland is not necessarily a vintage car-friendly environment,” he says. “It’s a lot of hills and the old Saabs don’t like hills because the brakes aren’t very good. The motors are not very powerful. It’s a small 46 horsepower motor, but they loved the car. They said it was one of the best experiences they’d ever had.” Donney says he had the rare privilege of getting to meet Seinfeld, who was pleased to get to drive the near-50-year-old Saab.

In this clip from the show, Seinfeld said he loved the car — in part — for its quirks. “The thing that’s cool about a two-stroke is there’s no valves, you mix the oil and the gas,” Seinfeld says. “It sounds weird, it feels weird, it runs weird, if you don’t like weird, Saab is not for you.”

Comedian Fred Armisen of the show “Portlandia” joins Seinfeld in the vehicle in the episode, which can be seen at: www.comediansincarsgettingcoffee.com