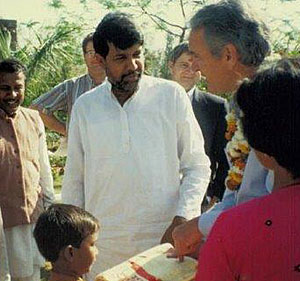 Senator Tom Harkin flew to Oslo, Norway, Tuesday so he could attend today’s Nobel Peace Prize ceremony and see the man he nominated win the award. Harkin nominated Kailash Satyarthi for the Nobel Prize, for his campaign against child slavery.

“What he would do is he would get people together, he would find a factory where they have a lot of these bonded kids working in bad conditions…and they would go there and rescue these kids,” Harkin says, “hurry them out, put ’em in their trucks and take ’em back to a sanctuary.”

Harkin first met the man in 1991 and they have worked together on the issue ever since.

Satyarthi, who is from India, calls child slavery an “intolerable….crime against humanity” and he has said that he hopes by winning this year’s Nobel Peace Prize, more people will acknowledge that child slavery exists — and must end in our lifetime. This year’s other Nobel Peace Prize winner is 17-year-old Malala, the young Afghan girl who was shot in the head by the Taliban for being an advocate of women’s education.

The Nobel Peace Prize ceremony begins at 1 p.m. in Norway, which is 6 a.m. Iowa time today. It will be followed by an evening banquet that Harkin will attend, along with past Nobel laureates and other dignitaries, like Norway’s royal family. The banquet will begin at noon Iowa time, 7 p.m. in Norway.

Harkin’s trip is a quick one. He plans to fly back to Washington, D.C. Thursday, anticipating votes in the U.S. Senate.