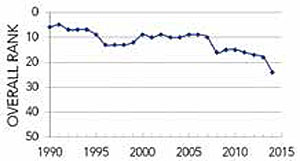 Iowa has dropped several more notches on the latest report that ranks the states for their health and wellbeing.

“This year, Iowa is ranked 24th,” Dr. Randall says. “Last year, they were ranked 18th, so a decrease by six ranks. In 1990, when we started this report, Iowa was ranked number-six, so over the course of the 25 years, it’s an 18-rank decrease and it’s been a fairly slow, steady decrease over the last 25 years.” She says Iowa had poor showings in several categories this year.

“You’re ranked 47th in the nation for binge drinking, where 22% of the adult population is reporting that they binge drink,” Randall says. “You’re also ranked 46th for access to primary care physicians, and then a high incidence of infectious diseases, ranked 41st in the country there.” Iowa also had a poor showing in rates of smoking, obesity and inactivity.

While Iowa now ranks in the middle of the national pack at 24th overall out of the 50 states, she says Iowa still did very well in some categories. “There’s some areas to be very proud of,” Randall says. “(Iowa) ranked 4th in immunization coverage for children, that’s great to see many preventable illness and infectious diseases with vaccinations. Also, a high rate of high school graduation, ranked 5th in the nation there. Those two together show you’re doing right by the kids.”

Iowa also had the 5th highest rank in the country for people with health insurance. Hawaii ranked first this year, Mississippi was last. See the full list of the rankings at: www.americashealthrankings.org