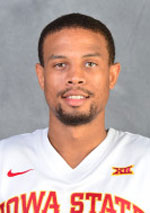 A Story County judge ruled today that Ames police did not have probable cause to arrest Iowa State basketball player Bryce Dejean-Jones on a drug-related charge. Dejean-Jones had been charged with keeping a residence where a substance believed to be marijuana was discovered.

Dejean-Jones, a UNLV transfer was also charged with hosting a loud gathering and breaking the city’s noise ordinance. The drug charge was dropped during his appearing in Story County District Court in Nevada today.