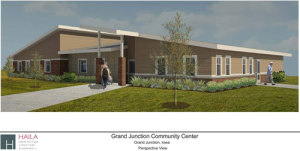 A small town in west-central Iowa was awarded a $220,000 state grant Wednesday for the construction of a new community center. Diane Wise has helped lead the fundraising effort in Grand Junction. She says the town’s old community center was shut down this summer.

“It had black mold, the ceiling was falling in, the floor was falling in, it was just an old, old building,” Wise said. “It is the center of everything in Grand Junction…and it was closed just because it was no longer useable.”

The Vision Iowa Board awarded Grand Junction a Community Attraction and Tourism grant. The total cost of building the new community center is estimated at $1.1 million. The building will house the city hall and council chambers and will include a kitchen, a meeting room, and a larger space to accommodate groups of roughly 200 people. Wise has high hopes for the project’s ability to revitalize the town of 800 people.

“We’ve got new businesses approaching us about coming into town and this building is just going to draw more and more to the community,” Wise said. “This is a catalyst to a new community.” While she’s been the driving force behind the project, the 63-year-old Wise is not even a resident of Grand Junction. Her address is rural Jefferson.

Wise’s husband, David, died in 2002. He grew up in Grand Junction and Wise has been pushing for the new community center as a way to honor her late husband. David Wise, a Vietnam War veteran, died of lung cancer likely linked to exposure to Agent Orange.