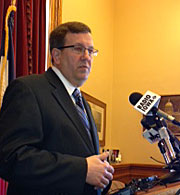 The speaker of the Iowa House predicts some of his colleagues will be candidates for statewide office in the future. Kraig Paulsen has been House Speaker since January of 2011 and he says Republicans winning seats in state legislatures around the country are gaining policy experience they can use at the next level.

“We are creating a pool of extremely talented candidates for state-level offices and also for federal offices,” Paulsen says. Paulsen, who decided against running for congress himself this past year, is the incoming chairman of the national Republican Legislative Campaign Committee and he notes that in 2014, Republicans gained majority control of 69 state legislative chambers.

“Obviously we had a remarkably successful year,” Paulsen says. “We hold more legislative seats across the country than we ever have in history.” Republicans gained four seats in the Iowa House in the 2014 election, but Democrats held onto their two-seat majority in the Iowa Senate.