You are here: Home / News / Iowa ranked as ‘most affordable’ state in U.S. 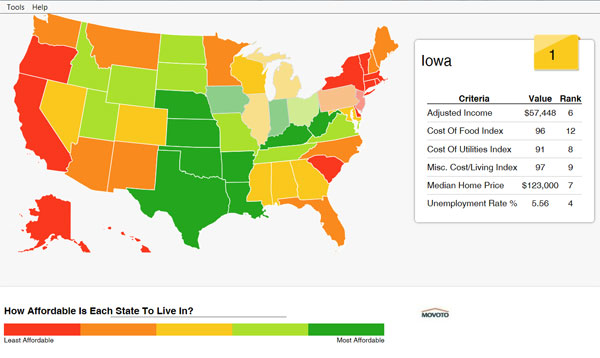 An online real estate firm has ranked Iowa as the “most affordable” state in the country.

Movato.com used a number of criteria for its ranking of the states, like the cost of food and the job outlook as well as housing prices and the adjusted gross income for residents of the state.

The firm found Iowa had “savings galore” for its residents with a very low cost of living. Iowa’s relatively high adjusted income of over $57,000 for individuals was sixth best in the U.S. The company ranked Oklahoma as the second most affordable state in the country. Kansas was number three. Nebraska and Texas tied for fourth place on the “most affordable state” list. California was 50th, making it the least affordable state in which to live.

The real estate firm — which is based in California — released a “top 10” list of best places to live in Iowa earlier this year. Eight were suburbs of Des Moines. The other two were suburbs of Iowa City.