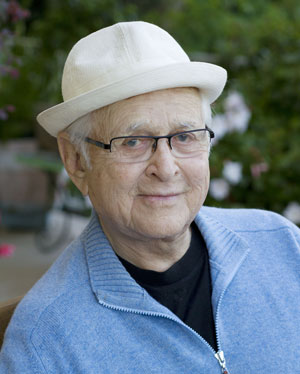 A writer and director who produced some of the most popular television shows of the 1970s is in Iowa this weekend. Norman Lear’s trip to Des Moines and Greenfield coincides with the 45th anniversary of the release of Lear’s first and only movie he ever directed. “Cold Turkey” was filmed primarily in Greenfield, as well as locations in Winterset, Orient and Des Moines.

“Everything about my experience with Iowa is amazing, including this visit,” Lear told Radio Iowa. The 92-year-old Lear credits the experience of working in Iowa in the summer of 1969 with much of his later success in producing hit TV shows. Cold Turkey was released in 1971, the same year Lear’s “All in the Family” premiered on CBS.

The sitcom was ground breaking as it dealt with controversial issues previously ignored in comedy programs. “When I was making All in the Family and the network told me ‘you can’t do this’ or ‘you shouldn’t do that’ and I would ask why, the answer was always one of two things; it won’t fly in Des Moines or there will be a knee-jerk reaction in the Bible Belt,” Lear said. “Having had my experience in Des Moines, it was so easy for me to feel and say, ‘wait, don’t tell me what will fly in Des Moines, I come from Des Moines.’ Spiritually, I felt exactly that way, I come from Des Moines.”

The movie “Cold Turkey,” which features Dick Van Dyke, tells the story of a small town — Eagle Rock, Iowa — that takes up the challenge for all its residents to quit smoking for one month to win a $25 million prize. Lear, recalling the summer of ’69, remembers how Iowans “fell in love” with Van Dyke and how everyone in the cast enjoyed meeting the locals. Lear has a photo from that summer that he keeps framed in his home.

“I have a photograph of my daughter Maggie, who’s now in her mid 50s, and she’s a little girl sitting on the lap of a guy’s face I’ll never forget – a farmer. It’s a picture that graces my home office to this day,” Lear said. The native of Connecticut has a home in Vermont, but Lear was named an “Honorary Iowan” in 1999 when he returned to Greenfield with Dick Van Dyke and others to celebrate the 30th anniversary of Cold Turkey.

Lear will be a special guest tonight (Friday) at the “Celebrate Iowa Gala” at the State Historical Museum in Des Moines. Lear will be in Greenfield Saturday morning for an event at the Warren Cultural Center where he’ll read excerpts from his new book, “Even This I Get to Experience.”