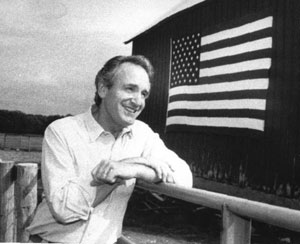 Early photo of Tom Harkin from his Twitter Feed.

Senator Tom Harkin delivered a half-hour-long farewell speech in the U.S. Senate today. Harkin said leaving the institution he loved was “hard and wrenching and emotional.”

“There is still no other place in America where one person can do big things — for good or for ill — for our people and our nation,” Harkin said. Harkin challenged those who’ll be serving in the senate in the future to address key issues, like the growing income inequality in America.

Harkin recounted legislation he shepherded through congress during his 10 years in the House and 30 years in the senate, including Farm Bills and the landmark Americans with Disability Act. Harkin said the 60 percent unemployment rate among adults who disabilities who are able and want to work is a “stain” on the country and he pledged to remain “in the fight” to secure more job opportunities for disabled adults.

“I believe that government must not be just an observant bystander to life,” Harkin said. “It must be a force for good, for lifting people up, for giving hope to the hopeless.”

Harkin spoke of his parents, paid tribute to his wife and family and praised his staff before having the names of all his staff printed in the congressional record.

Harkin’s speech touched on themes Iowans who’ve followed his career would find familiar as he described his political philosophy. He closed by teaching his colleagues the American Sign Language sign for the word “America”. He described the sign as an “interconnected…circle of inclusion” and a symbol to which the country should always aspire.

“And with that, Mr. President, for the last time, I yield the floor,” Harkin said, to applause.

After he was done, other senators paid tribute to Harkin. Iowa Senator Chuck Grassley, who went first, said: “so long, rather than goodbye” to his colleague.