You are here: Home / News / Ice conditions not yet trustworthy on lakes and rivers 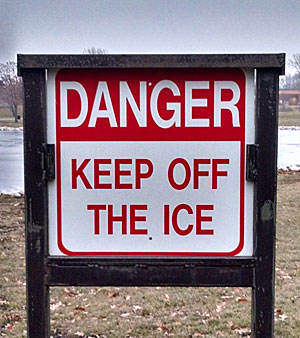 Temperatures have warmed up and that might make you want to head out to try some ice fishing. Army Corps of Engineers Natural Resource Specialist, Phillip Rustad, says that’s one activity that should be still be put on hold until further notice.

“Until we get some more consistent cold weather to create good ice, I would recommend nobody probably go out on the ice or wander out on the ice we have out there because it’s just not very safe. There’s a lot of open spots on a lot of the lakes,” Rustad says.

Rustad says you should always wear some sort of life preserver whether you’re in a boat or just near the water. “They have inflatables now that aren’t very bulky at all, you can wear em under your coat, you can wear em on top,” Rustad says. “They are just little packs that can go around your waist, there’s a lot of options for people.” Rustad says if you fall into the water, don’t panic.

Remember the 1-10-1 rule. Cold shock will pass in about one minute: in the next ten minutes; you will have effective use of your fingers, arms and legs. And it could take up to an hour before you become unconscious due to hypothermia. Rustad says it will take several days of sub freezing temperatures before the ice will be safe again.