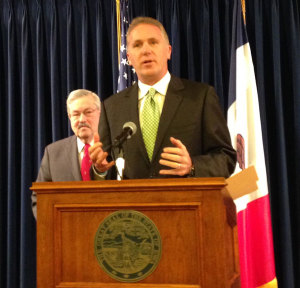 Former Iowa quarterback Chuck Long is taking over as CEO of the Iowa Sports Foundation, the organization that runs the Iowa Games, the Senior Games and the Live Healthy Iowa challenge.

“I’m excited. I’m honored to be here. It’s all come fast and furious, but this is a foundation that realy fits me or I fit it,” Long says. “When they came and approached me about it, I knew right away that I wanted to be a part of it.”

“This one is near and dear to my heart ’cause I grew up with a brother with cerebral palsey, so I was part of his programs throughout his life and this is a very special program that I would like to grow now and in the future,” Long says.

Today is the opening day of enrollment in the foundation’s 10-week Live Healthy Iowa Wellness Challenge.

“It’s a program that I actually was involved with last year in another company — and any community or business or any Iowans that can get a team together of between two and 10 people and register on www.livehealthyiowa.org. It’s $20 a person,” Long says. “It’s a really inexpensive way to be part of a wellness program.”

Long says last year he and his teammates kept track of their activity and nutrition — and wound up losing a “significant amount of weight.” This year’s Live Health Iowa Challenge begins January 26 and ends April 3.

Jim Hallihan, a former Iowa State assistant basketball coach who served 17 years as the foundation’s executive, retired in 2011 and Clarence Hudson, a former football coach and executive in Ruan Transportation, took over. Long, the new Iowa Sports Foundation CEO, was the runner-up for the Heisman Trophy in 1985 and he played professionally for the Detroit Lions and the Los Angeles Rams.

Long has more recently been a college coach and an analyst for the Big Ten Network.