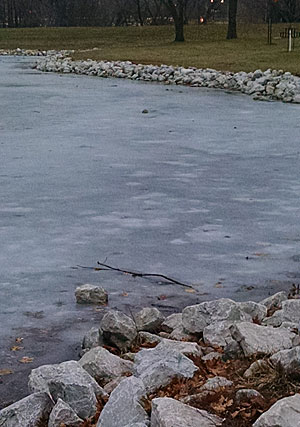 Iowa lakes and rivers went into winter with good levels.

The state entered winter with groundwater levels up and no drought conditions reported in the state, but that has changed a little in recent weeks. Tim Hall tracks the water conditions for the Department of Natural Resources and says drought conditions in the Dakotas and parts of Minnesota have crept into Iowa. “That’s just sort of snuck into the northwest corner of the state, it’s not a big deal right now, we just want folks who live in that part of the state to be aware of it, and we’ll just sort of keep an eye on it over the winter,” Hill says.

The area has been rated “abnormally dry” which Hall says is the rated that brings the least concern for drought conditions. November saw more snowfall than normal, but Hall says that doesn’t help the dry conditions at this time of year.

“The frozen ground prevents a lot of general soaking in of rainfall, plus we’ve got to keep in mind that there’s often a ten to one ratio between the amount snow we get and the amount of moisture that is in that snow,” Hall says. “So, a ten-inch snowfall — which is a big deal in Iowa — could be as little as an inch of rain, which isn’t as big a deal.”

He says most of the state has normal stream flow and western Iowa has some above-normal stream flows. “That indicates there’s an abundance of moisture in the system and that spells good news potentially for spring planting as there is enough moisture out there,” Halls says. “That’s a significant improvement over where we’ve been over the last couple of years.”

One other things Hall has noticed about the water systems this winter is that we’ve seen some of the earliest lake ice on record for Iowa’s northern lakes. Big Spirit Lake froze November 16th and West Okoboji Lake was close to being completely frozen on December 1st. “Generally the onset of ice on the lakes isn’t a huge impact on the hydrology,” according to Hall. He says it is kind of interesting for “weather junkies” to look at and see how the icing of the lakes compares to past years. Hall says the ice on the lakes can help prevent some evaporation, but overall it doesn’t have a major impact on the water situation. And he says the changing temperatures will make the ice conditions vary quite a bit. For more on of Iowa’s water resource trends, go to www.iowadnr.gov.