You are here: Home / News / White Christmas is likely to be just a dream in Iowa this year 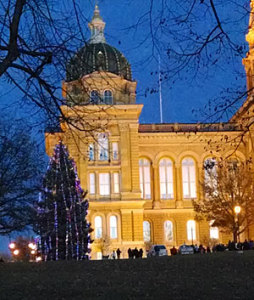 The Christmas tree outside the state capitol.

The prospects for a white Christmas in Iowa appear to be pretty slim. National Weather Service Meteorologist Kenny Podrazik says the generally accepted definition of a “White Christmas” is at least one inch of snow on the ground on the morning of December 25. “You know, there may be a little bit of snow tonight across northern Iowa, but we going to be pretty hard pressed to get an inch out of that,” Podrazik said.

In addition, even if snow does fly, temperatures will be too warm for the snow to stick through Christmas. According to Podrazik, this will likely be Iowa’s first Christmas since 2006 without any snow on the ground. Five years ago, Iowa had one of its snowiest Christmas days ever. “The 2009 Christmas is tied with 1895 with 8 inches of snow on the ground,” Podrazik said.

That warmest temperature in Des Moines on Christmas day, 58 degrees, came in 1936.