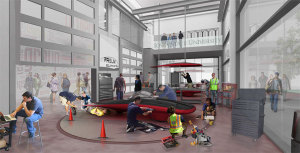 Iowa State University’s president is asking the governor and legislators for $40 million in state tax dollars to construct a new building on campus. Steven Leath made his request for construction of a “Student Innovation Center” directly to Governor Branstad Monday afternoon.

“We have really antiquated facilities in the middle of our Armory. Many of the colleges can’t fit students in and they’re really not safe or capable for some of the new projects so we’d like to build a Student Innovation Center,” Leath said. “This building is 100 percent for students. This isn’t a faculty building or anything else. This is a student building.”

The project’s total cost would be $80 million and Leath is promising that ISU will raise half that — if state policymakers put up the rest.

“We do have a donor who’s pledged $20 million for this facility. It’s the largest gift…we have received to date for an academic building. It’s pending, you know, that the building gets funded (by the state), but the money is real. They’ve already signed all the pledge forms,” Leath said. “…We’re really, really excited about doing this project.”

Iowa State University’s enrollment has grown by 6000 students in the past three years and Leath said the majority of those are students in the colleges of engineering and agriculture.

“One of the reasons I think we get 95 percent job placement is we hear constantly from employers that out students have a lot of hands-on skills,” Leath said. “Most of them come out (of ISU) and they’ve done projects, capstone projects, and they’ve learned with their hands.”

Leath warns the “antiquated” facilities on the Ames campus, however, will hold future students back and that’s why the new building is on his wish list.

“There’s probably not been more excitement about a project at Iowa State than this one, ever,” Leath told Branstad and the governor’s top staff. “And with the student numbers and the crampness on campus with all the numbers, the students really want to see this.”

Leath made his request during an-hour-and-15-minute-long budget presentation from all three state universities. Neither the University of Iowa nor the University of Northern Iowa are asking lawmakers to provide more money this year for construction of new buildings on the campuses in Iowa City and Cedar Falls.