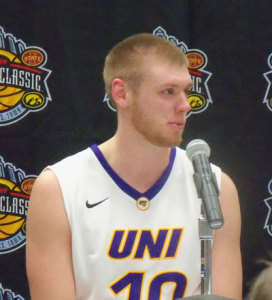 Northern Iowa was down six at the half, but held Iowa to just 15 points in the second half and went on to a 56-44 win in the Big 4 Classic in Des Moines Saturday. Panther senior forward, Seth Tuttle, says they had to adjust their pace in the second half.

“I think we just found a rhythm, that first half they did a good job and I don’t know if we were quite as aggressive as we need to be… we talked at halftime about how we needed to push in transition and make things happen,” Tuttle says.

Coach Ben Jacobson credited his team with turning up the defensive pressure. “Our guys found another level of defense in the second half, and that’s what I told the guys afterward, our defense is better because we worked on it more than we did a year ago,” Jacobson says.

Jacobson says the defense changed the game. “A couple of things that we’re doing, one from a scouting report standpoint, we are taking things away, from first option to second option, so it’s a little harder for them,” Jacobson says. “And then two, the more important part as I mentioned, the guys care a lot more about it, and that covers up for the mistakes that you make.”  Paul Jesperson was the only Panther in double figures, with 10 points. Tuttle had 9 points, 5 rebounds and 2 blocked shots.

The Panthers held the Hawkeyes to 3 of 24 shooting in the second half, including 0-7 from three-point range. Hawkeye senior forward, Aaron White, talked about the turnaround from the first to the second half. “We’ll we didn’t make shots, that was apparent, and also I think when the going got tough we went to one-on-one action,” White says.

Hawkeye coach Fran McCaffrey agreed with White. “They scored the first couple hoops in the second half and we started going a little one-on-one, we had a couple of really good looks and they didn’t go down and that’s kind of the story of our team. We shot it maybe a little bit quick at times, maybe settled for jumpers,” McCaffrey says.

Iowa has had trouble in the second half in the four games they’ve lost, and McCaffrey says part of that is the competition. “Four really good programs with really good players, so it’s one of those situations where you don’t want to get too down on yourself. But at the same time you’ve to be honest with yourself and says we’ve got to change some things, we’ve got to be better in some areas,” McCaffrey says.

The Hawkeyes ended up hitting just 27.5 percent of their shots from the floor.

“As frustrated as they might be, I am frustrated for them,” McCaffrey says. “Because to a man they’re coming in and getting extra shots up, they are. And they are making shots in practice and they are working the ball in practice.   I’ve always been a believer if guys are struggling you keep encouraging them and you keep wanting  them to shoot, the ball and that’s how you respond and I don’t make a big thing about it. They are feeling pressure, I don’t know if they are feeling pressure, or if they are putting pressure on themselves, but really good shooters are missing wide open shots.” Mike Gesell led Iowa with 10 points, Adam Woodbury had 9.

White was asked how he will be a leader to keep the team together. “I loved the guys in the locker room, we are all there for each other, just stay together, unite as one,” White says. “We know there are going to be naysayers   and people doubting us, we’ve just got to band together, the guys in the locker room and fight through this little spell we are in. We are going to get through it together, that’s the main thing.”

While UNI beat Iowa, because of the format of the Big 4 Classic, they won’t play Iowa State, which beat Drake and it leaves open the question about which is the best team in the state. UNI’s Tuttle was asked about the issue.

“It’s always fun playing in-state games, that’s a tough question,” Tuttle says.  Coach Ben Jacobson chimed and told reporters they were supposed to save tough questions like that for him. “We’d love to play them, that’s a great team, a great opportunity to play a good team, but we just play the teams that are on our schedule, this year it was Iowa and we are happy to get the win,” Tuttle says.

Jacobson was then asked which team is the best in the state, he says to ask Cyclone coach Fed Hoiberg. “Ask the mayor, “ Jacobson said to laughs. “From what I understand the Mayor’s never been wrong, the Mayor is usually right so ask him, yeah.”

The Panthers are now 10-1 on the season. They are off until they play South Dakota State on December 28th. Iowa is now 8-4 and will play North Florida Monday night.