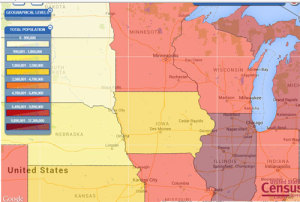 Iowa’s population has grown by 60, 257 since the 2010 census according to new estimates from the U.S. Census Bureau. Iowa’s population is now 3,107,126. Gary Krob, coordinator of the state library’s State Data Center program, says that’s a two percent increase in the past four years.

“We like to say ‘slow and steady’ — that’s pretty much what Iowa’s growth has been for quite a while here,” Krob says. “We don’t grow nearly as fast as a lot of states, but it is continued growth.”

The total U.S. population grew by 3.3 percent. Iowa’s two percent jump in population since 2010 is higher than several neighboring states.

Iowa’s birth rate and people who moved here from other countries fueled Iowa’s growth, according to Krob.

“In Iowa’s case, our international migration is pretty good,” Krob says. “It makes up for a very small outward domestic migration.”

The U.S. Census estimates there were over 160,000 babies born in the state during the past four years and over 21,000 people moved here from another country. Those gains offset the number of deaths during that four-year period, along with the loss of about 4500 people who moved to another state.

“This is a positive sign for the state,” Krob says. “This is our 24th year in a row of continued growth. While the growth isn’t as fast as in other areas, it is still growth. It is still positive and the international migration really helps our state’s population increase.”