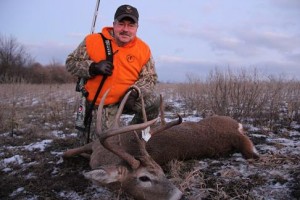 Deer hunters are expected to take around the same amount of deer this year as they shot last year. (file photo)

“Our second shotgun season hunters did reasonably well, a little bit better than last year. We’re pleased to see that there’s some good hunting opportunities out there,” Suchy says. The first shotgun season this year saw an increased take of deer of around 19 percent.

Suchy is the DNR’s wildlife research supervisor, and he says it was interesting to see the impact of the weather as hunters reported the animals they took during the second shotgun season. “During the first weekend, hunting was pretty much the same, and then we had that cold weather, windy and some rain and it went down,” Suchy says. “And then the last weekend, it was kind of wet which made it a little tougher, but the temperatures were mild, and that really seemed to get people out in the field.”

Hunters are on pace to take around 100,000 deer. “Right now we are a little bit ahead of where we were last year, and so I would expect at the end of the year we will be close to the same as last year. And the reason that is, is we eliminated the January antlerless season, so we won’t have as many opportunities coming up.”

Hunters who want to take a deer now have to do so with less conventional weapons. The muzzle loader and archery seasons started are now open and will run until January 10th. He says the last season doesn’t have near the number of hunters and deer taken. “We harvest a few thousand animals during that time period,” according to Suchy. “It’s an excellent opportunity for people get out…you’ve got holidays and weekends, so you’ve got some time off.  It really depends upon the weather. If we have good weather, people get out, if we don’t people hang it up for the year.”