You are here: Home / News / Ernst victory is Iowa’s top political story of 2014 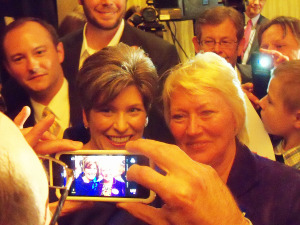 Joni Ernst poses for a picture with a supporter after her victory speech on election night.

A campaign ad that aired this past spring catapulted a little known state senator into the national spotlight and, ultimately, helped break Iowa’s glass ceiling.

“I’m Joni Ernst. I grew up castrating hogs on an Iowa farm, so when I get to Washington I’ll know how to cut pork,” Ernst said in the ad, just before the squeal of a pig.

On Election Night, Republican Joni Ernst became the first woman from Iowa to be elected to congress.

“Well, Iowa, we did it!,” Ernst told cheering supporters. “We did it!”

“There is still no other place in America where one person can do big things, for good or for ill, for our people and our nation,” Harkin said in a retirement speech on the Senate floor.

Democrat Bruce Braley decided not to run for his northeast Iowa congressional seat and run for Harkin’s senate seat instead. Voters in the first district selected Republican Rod Blum, a Dubuque businessman, as their new congressman.

“I don’t think I’m your average Republican,” Blum told Radio Iowa on Election Night. “…I think when people hear my message they say, ‘You know, hey — this guy’s not hyper partisan.'”

“I’ve never learned a thing when I’m talking,” Latham said in a farewell speech on the House floor. “…Listen to each other more.”

“We worked hard. We were nice. We had ideas and I think the voters recognized that in the end,” Young told Radio Iowa on Election Night.

Republican Congressman Steve King of Kiron also won reelection, as did Congressman Dave Loebsack of Iowa City. Loebsack will be the only Democrat in Iowa’s congressional delegation next year. 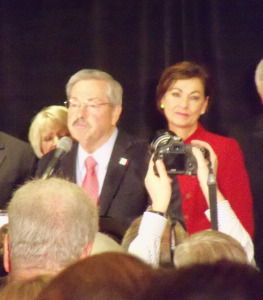 Republican Governor Terry Branstad cruised to reelection in 2014. In this middle his sixth term Branstad will become the nation’s longest-serving governor.

“We’ve laid the foundation to make Iowa the envy of the nation and I’m proud to say we’re well on our way, but we’re not done yet!” Branstad said during his victory speech on Election Night.

The 2014 Iowa legislature passed a law that would let children with chronic epilepsy to take cannabis oil as treatment to reduce the frequency and severity of their seizures.

“What we’re offering today is hope for these families,” Rep. Bob Kressig (D-Cedar Falls) said in the early morning hours of May 1 as the bill passed the House — on the final day of the 2014 Iowa legislature.

But the parents of those kids say while they no longer face prosecution in Iowa for possession of cannabis oil, it’s almost impossible to get it. Sally Gaer of West Des Moines has a daughter with chronic epilepsy.

“Working together, we can come up with a program that can benefit our medically fragile,” Gaer said during a hearing at the statehouse in September. “…This program has to include growing, processing and distributing the medicine in Iowa.”