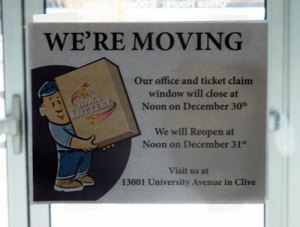 Sign on the door of the Iowa Lottery headquarters.

The new year will mean a new building for the Iowa Lottery. The headquarters where those who win the big prizes confirm their tickets and pick up large ceremonial checks is moving west from Des Moines to the capital city suburb of Clive.

Iowa Lottery CEO Terry Rich talked about the move prior to the holidays as chairs and tables and everything else was getting marked with tape to help in the packing and moving.

“You’ll see tape all over the place, where we’re able to identify where they are all going to go. Some of it is going to other agencies — things we have left over — of course as a state agency we want to utilize everything that we can,” Rich says.

The Iowa Lottery budgeted around $7 million to move to the new building, after concerns that the heating and cooling system in the current building built in 1954 would not continue to function as needed. Rich says it was found to be more cost effective to move to the new building rather than try to work around extended renovation of the old building.

The new building did need some upgrades for security and other issues, but Rich says that has gone well. “We are really pretty excited that we think it’s going to be under budget and on time. And that’s important for our operation, because the whole reason we decided to move is because we didn’t want to disrupt a million-dollar-a-day operation,” Rich says. The Des Moines School District has purchased the old lottery building and will have time to do work on the building before moving in and turning it into the district’s administration building.

Rich says the moving vans will pull up Monday and begin moving to the new location that he says is still centrally located in the state. He says it will still be convenient for players from all over the state to come in and find the office right off the intersection of Interstates 80 and 35 so the can cash in their tickets. The Iowa Lottery’s office will be closed on December 30th and reopened at the new location on December 31st.

Anyone who wins an Iowa Lottery prize of more than 250-thousand dollars must claim that prize in person at lottery headquarters.