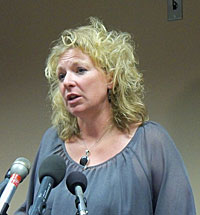 The Iowa Department of Public Health says there are signs the flu is picking up steam in the state. Deputy State Epidemiologist, Ann Garvey, says they are now calling this a “widespread” outbreak. “Our surveillance is showing that flu activity is increasing in all parts of our state right now, were are seeing increases especially in our hospitalization rates,” Garvey says.

Doctor Garvey says a large number of people who’re are going to the hospital with the flu are over the age of 64, which she says is an indication that group appears to be getting sicker from the flu. “So we’re just encouraging all Iowans, if you have not gotten vaccinated yet, we recommend that you do it right away,” Garvey says. Several flu outbreaks have been reported in long-term care facilities, especially in central and western Iowa.

IDPH reported earlier that the flu vaccine is not covering the flu as well as expected, but Garvey says it’s still important to get a flu shot. “What happens every year, flu viruses will drift a little bit. And one of the strains that is in the flu vaccine — the H-3-N-2 strain — has drifted a little bit. Again, that’s expected every year, but usually that happens a little later in the season and then we are able to use that strain in the next year’s vaccine,” Garvey explains. “This year it’s just happened a little earlier. And what that means is, the vaccine is not as protective as we’d like it to be. It still gives some coverage, but not as much as we’d like.”

She says we’ve all been in closer contact with each other as we visit family and friends for the holidays, and that leaves open the potential for the flu to spread. “Again, we’d recommend that everybody get vaccinated because it will give you that partial protection that will hopefully prevent hospitalizations and more severe illnesses,” Garvey says. “And again in Iowa, we’re seeing all four strains circulating — the two B strains, the H-3 strain, and H-1-N-1 strain.”

Doctor Garvey says the simple prevention rules they talk about year-round are even more important with the flu being active. “Making sure we’re using good respiratory etiquette like covering our coughs and sneezes. And it’s always important to wash our hands, especially this time of year,” Garvey says. She says those steps will also help with the other common illnesses that circulate this year like norrovirus. She says there have been some norovirus outbreaks that cause vomitting and diarrhea for a 24-hour period. Garvey says it’s also important to stay home if you get ill to prevent spreading the virus to family, friends and co-workers.

For more information about where and what kind of influenza is in Iowa, go to the Iowa Department of Public Health’s website.