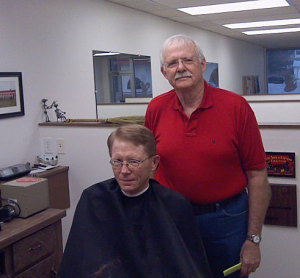 The end of the year will mark the end of a nearly five-decade career for one of Sioux City’s best know barbers. Neil Peck will close his shop on December 31st after giving haircuts in western Iowa for 49 years. Peck did a two-month internship after graduating from barber college and then moved to the Bellas Hess shopping area in the Morningside neighborhood of Sioux City.

He cut the hair of thousands of people through the years, and one stands out. “A gentleman came into the shop when I was at Bellas Hess and wanted to get his hair dyed and a different look, and so we did all that. And about a half hour after he left, the FBI came in and he had just robbed the bank,” Peck says.

Peck, is called “The Mayor of Pierce Street” by some of his customers who visit the Northside Barbers. He not only cut hair, but he served as someone for customers to share their lives with.

“To be quite honest, over the course of 49 years, people share more probably with me than some of their family. I know things about families — some good, some bad — than probably their families know,” according to Peck. “Same thing in the political world. Some things have been surprises to people, haven’t been surprises to us, because we hear it in here.”

Peck’s partner left the business several months ago and Peck says as he retires, it’s a trend that the neighborhood barber shop has been slowly disappearing from the Sioux City area. “When I started, we had approximately 160 barbers working in 140 some shops,” Peck says, “and as I leave we have — give or take a few — about 10 shops and about 13 to 14 licensed barber/stylists left in Sioux City.” Peck says it cost him $600 to go to barber school when he started and it now costs around $20,000.

Peck is already booked full through his last day and has decided the person who will get the last haircut. “There’s been a lot of them that said ‘I wanted to be the last,’ but by my own choosing, he is a good friend and he’s actually a business neighbor right next to here in the coffee shop,” Peck explains. Peck will keep busy when he puts down the scissors as a minister at the First United Methodist Church and as chaplain at the Masonic Temple.