You are here: Home / Human Interest / No more renters; American Gothic home to be ‘program center’ 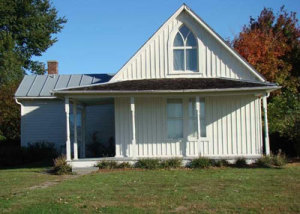 State officials are turning the home that was the backdrop for one of the most famous paintings of the 20th century into a permanent “program center.”

The state of Iowa has owned the American Gothic House in Eldon since 1991 and Iowa Department of Cultural Affairs and Mary Cownie says the last tenant who lived there has recently moved to California to be closer to her parents.

“Beth Howard was the pie lady and she brought a lot of attention to it through her cook book and all that she did,” Cownie says.

Howard is a self-described “pie evangelist” and blogger who has written two books. One is a memoir about how pie baking helped her deal with her 43-year-old husband’s unexpected death. The other is a pie cookbook, born out of the successful “Pitchfork Pie Stand” she ran out of the home.

Now that Howard has moved out of the American Gothic House, the Department of Cultural Affairs is partnering with Humanities Iowa to enhance the home’s appeal to tourists. The first original work of art by Wood was acquired in November for display next door at the museum and visitor center. “And this house is just one of many iconic sites around Iowa that showcase the legacy of Iowa’s most famous artist, Grant Wood,” Cownie says.

Wood painted “American Gothic” in 1930. The home, with its recognizable gothic windows, is listed on the National Register of Historic Places. It has been a tourist attraction for decades and Howard, the last tenant to live there, is writing a book about what it’s like to live in a place tourists tramp around. Howard paid $250 a month to the State of Iowa to rent the home. She moved out in September.

Officials estimate that each year up to 16,000 tourists visit the American Gothic house. Many visitors borrow the pitch fork from the museum next door to strike the pose in front of the home that Wood made famous in his painting.