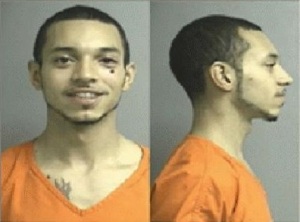 Authorities are looking for a Cedar Rapids man in connection with a fatal shooting in Waterloo earlier this month. James Robert Ernst II, 25, is wanted for first-degree murder in the death of Orintheo Campbell, Jr. A warrant for Ernst’s arrest was issued Tuesday.

On December 6, officers were dispatched to the parking lot of the Prime Mart convenience store on Broadway Street in Waterloo around 1:30 a.m. on a report of shots fired. A short time later, the 23-year-old Campbell arrived at Allen Hospital in a private vehicle to get treatment for gunshot wounds. He was later pronounced dead at the hospital.

An autopsy performed at the State Medical Examiner’s Office in Ankeny determined that Campbell died from multiple gunshot wounds.