You are here: Home / Crime / Courts / Iowa to end year with no shooting deaths in law enforcement 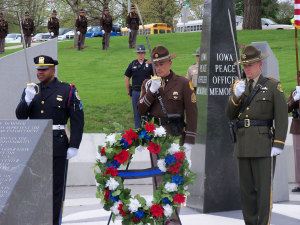 The last time an Iowa law officer was killed by gunfire was on September 13, 2013. Jamie Buenting was an eight-year veteran of the Rockwell City police department.

This past September, a jury found 33-year-old Corey Trott guilty in Buenting’s shooting death. “I believe the one before that was Deputy Eric Stein in 2011,” Bright said. “We don’t usually have them every year…we were very fortunate this year we did not have any.”

Keokuk County Sheriff’s Deputy Eric Stein was killed on April 4, 2011. His alleged killer, 53-year-old Jeff Krier, was later shot and killed by other law officers during a standoff. Stein’s death marked the first time in 25 years an Iowa law enforcement officer was shot and killed while on duty.

At least two police officers in the state were injured by gunfire this year. Sioux City Police Officer Jill Ohm was shot in the chin as she was responding to a disturbance call on October 3. The man who allegedly shot Ohm, 27-year-old Noah Ironshell, died of a self-inflicted gunshot wound to the head.

On April 1, Maquoketa Police Sergeant Brendan Zeimet was hit in the arm in an exchange of gunfire with a motorist who was said to have a history of mental health issues. That individual, 30-year-old Aaron Scott, was also found dead from a self-inflicted gunshot wound.

Over the state’s history, at least 189 Iowa law enforcement officers have died in the line of duty — with 105 from gunfire, according to the “Officer Down Memorial Page.”