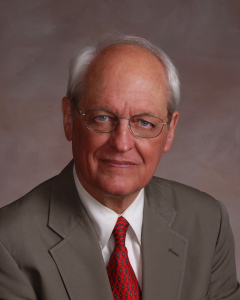 “He was a dedicated public servant, a very caring individual,” says Steve Roberts, a Des Moines lawyer who was chairman of the Iowa GOP at the time Neu served as governor. “He had a marvelous sense of humor.”

Neu, who was born in Carroll, Iowa, on February 9, 1933, got his undergrad and law degrees from Northwestern University. He practiced law in Carroll and served for six years in the Iowa Senate in the late ’60s and early ’70s. In the 1980s, after his stint as lieutenant governor, Neu was elected mayor of Carroll. Neu served on a number of boards and commissions, including the Board of Regents. It’s a an “amazing” record of public service, according to Roberts.

“He got elected as a Republican in Carroll County, which was also Democratic,” Roberts says. “That was also amazing.”

Governor Branstad issued a written statement this morning, offering his “deepest condolences” to Neu’s family. Branstad said he had “the honor” of succeeding Neu as lieutenant governor after Neu decided not to seek reelection in 1978 and Branstad said Neu’s “passion for his home community of Carroll was always evident.”

David Oman was serving on Governor Bob Ray’s staff in the 1970s when Neu was Iowa’s lieutenant governor.

“Art Neu was a giant, politically, at all levels of government in Iowa, but more importantly he was a wonderful human being,” Oman says, “and he will be missed by a lot of people on both sides of the aisle.”

Oman notes Neu served on several state boards, including the Iowa Board of Corrections as well as the Board of Regents.

“Arthur Neu had impact almost every time he said something or wrote something,” Oman says. “He was principled. He was a centrist. He cared deeply about people. He was able to work across party lines, solve problems. He cared deeply about education and the judicial system and he always did his work in a very humble, respectful way. The likes of him don’t come along all the time and he was a wonderful role model. He’ll be missed.”

Neu died this morning at a hospital in Des Moines. He was 81.

(This posted was updated at 12:13 p.m. with additional information.)