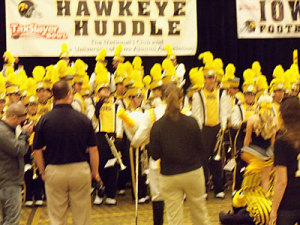 Iowa fans woke up to a day that’s overcast, but the temperature is 60 degrees as they prepare to head to the stadium to watch the Hawkeyes in the Taxslayer Bowl in Jacksonville, Florida.

The fans gathered at a downtown hotel this morning for the University of Iowa Alumni Association’s Hawkeye Huddle pep rally before heading to the game.

There were as many orange-clad Tennessee fans walking around the hotel as those in the black and gold, something 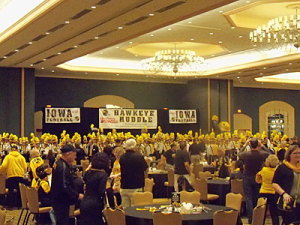 Dean Raichter of Goldfield noticed. “Yes, there are. This will be one of the few bowl games where I think we will be outnumbered,” Raichter.

But he doesn’t think that fan advantage will keep the Hawkeyes from winning based on his game prediction. He thinks it will be a 31-21 Iowa victory.

Kathy Simonsen of Cherokee agrees. “I think we are going to win,” Simonsen says. She didn’t offer a score prediction. 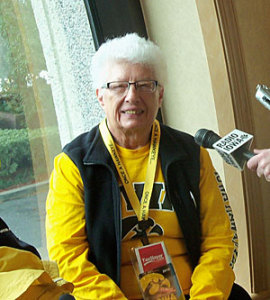 Sherri Pierce of Des Moines also noticed the large number of Tennessee fans, who she says have been everywhere in Jacksonville prior to the game. “You know what, they are the friendliest people. The Tennessee people have been very gracious and very friendly,” Pierce says. Pierce gathered those around her together to practice what they’ll be saying in the stadium.