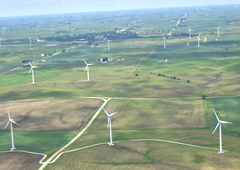 The Department of Natural Resources “2013 Iowa Greenhouse Gas Inventory Report” shows a decrease in greenhouse gas emissions for the second straight year. DNR environmental specialist Marnie Stein says the report is required by the legislature. “Emissions decreased about a half a percent from last year, but they are down 6.78 percent from when they peaked in 2007,” Stein says.

Stein says the use of more renewable power is the reason for the change. “The drop can mostly be attributed to a decrease in emissions from power plants. Those decreased 7.37 percent from last year, and they have decreased about 22 percent since 2010,” according to Stein. She says several power plants switch over from burning coal to renewable sources for creating electricity.

Stein says the EPA has a program that looks at the impact for every person and how many trees it would take to offset that impact. “The average Iowan emitted an average of 42 metric tons of greenhouse gases, and that is equivalent to sending 15 tons of waste to the landfill instead of recycling it,” according to Stein. “Or that’s the same amount of carbon that would be stored in 1,080 tree seedlings that were grown 10 years.”

Stein says the emissions could continue to drop with more changes in power plants. “We do have several plants that have units either switching over or planned shut downs, so we do thing that number will go down from the power plants,” Stein says.

The complete report is available on the Iowa DNR’s website at: www.iowadnr.gov.