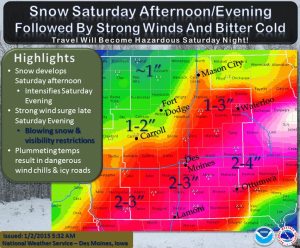 A revised weekend forecast issued by the National Weather Service shows Iowa won’t be getting as much snow as originally predicted. Meteorologist Kevin Skow says it previously appeared some areas of the state might see up to a half-foot of snow. “The overall storm track is shifting a bit more to the south and east, so the overall snow amounts have been lowered a bit, especially for central Iowa,” Skow said.

Now, much of the state can expect one to three inches of snow on Saturday. The highest snowfall totals, possibly up to four inches, are forecast over southeast Iowa. Despite the lower snowfall amounts, the white stuff — combined with high winds — could create a lot of problems.

“People shouldn’t be focused so much on the snow amounts as the wind that’s coming behind this storm,” Skow said. “Even with only an inch or two of snow on the ground, these strong winds we’re expecting of 30-to-40 miles an hour could easily cause reduced visibilities and blowing snow across roads. So, even though the snow amounts might be lower, we’re still looking for difficult travel conditions this weekend.”

The snow and wind will be followed by some extremely cold temperatures. “Temperatures will be dropping throughout Saturday night and Sunday. Lows on Saturday will be falling…we’re looking for negative single digits in northwest Iowa to the teens in southeast Iowa,” Skow said. “By Sunday night, we’re looking for lows to be in the negative single digits to negative teens across the state with wind chill readings in the 20-to-30 below (zero) range,” Skow said.

This first snowfall of 2015 could be followed by even more snow early next week. “We are looking for a second system to come through on Tuesday,” Skow said. “The amounts of snow are a little bit uncertain at this time. Temperatures will still be on the rather chilly side through the beginning and middle of next week.”