You are here: Home / News / Democrats discuss their agenda for 2015 legislative session (AUDIO) 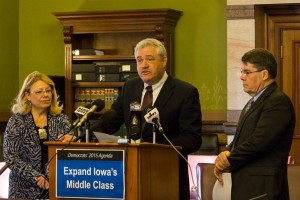 Democratic leaders in legislature have unveiled their list of priority issues for 2015, but admit none will pass unless Republicans in the House agree on the same approach.

“Any ideas need to have bipartisan support if it’s going to become law. There are simply no other options,” Senate President Pam Jochum, a Democrat from Dubuque, said during a statehouse news conference this morning. “The Iowa House, of course, has a Republican majority and the Iowa Senate a Democratic majority and, of course, our governor is a Republican.”

Among the Democrats’ wish list are proposals that failed to get support from Republicans in the past, including a plan to give Iowa businesses preferential treatment in winning state government contracts. Republicans argue the lowest bidder should always win, regardless of where the business is located, to ensure Iowa taxpayers get the best deal. Senate Democratic Leader Mike Gronstal of Council Bluffs says other states have laws giving in-state businesses the first shot at state government contracts and Iowa should do the same, with provisions that ensure taxpayers are protected.

“You structure something that says all things being equal, if an Iowa company has got a competitive bid, they’ll get the contract,” Gronstal said.

As they did last year, Democrats plan to press again to crack down on Iowa companies that fail to pay employees for work that’s been done. Gronstal says the “vast majority” of Iowa companies are doing right by their employees, but a study indicates a minority of Iowa businesses are failing to pay as much as 600-million dollars in wages is each year.

“Who can be against workers that worked the hours, that put in the time, but didn’t get paid? Nobody in their right mind can be against that,” Gronstal said. “So working through some legislation on that subject could move $600 million into Iowa’s economy.”

Republicans objected last year, suggesting the state would have to hire more auditors to police the payrolls of Iowa businesses. Gronstal said the current staff in state government could handle it, and he says “a few high profile” prosecutions for “wage theft” would send the message to the small minority of Iowa businesses that’re squeezing money out of their workers.

“The foundation of our economy is the middle class. We’ll be working together in this session to focus on strengthening Iowa’s middle class,” Smith said. “The key to that, we believe, is a quality education program that starts with pre-K and goes into higher education.”

Legislative leaders will meet privately with Governor Branstad on Wednesday to discuss the statehouse agenda for 2015. The 2015 legislative session begins on Monday.