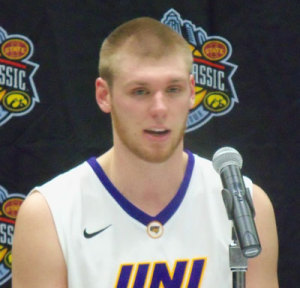 The UNI Panthers improved to 2-1 in Missouri Valley Conference play with a 55-39 win over Southern Illinois. Forward Seth Tuttle matched his career high with 24 points on 9 of 11 shooting and added eight rebounds. It’s the fifth time he has scored 24 points and the second time this season.

Both teams struggled to score as the Panthers led 25-18 at the half, before building a 16-point lead in the second half.  The 39 points was the Salukis’ second lowest total since 1950, and they are now 0-9 in games played since the McCleod Center opened at UNI.