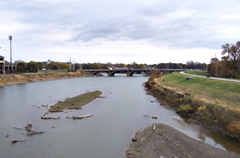 The Des Moines Water Works board of directors has voted unanimously to put officials in three northwest Iowa counties on notice that they’ll be sued for failing to control the “discharge of pollutants” into the Raccoon River.

The lawsuit will allege Boards of Supervisors in Buena Vista, Calhoun and Sac Counties have failed to adequately manage drainage districts in their area, causing nitrate levels in the water downstream to rise to unacceptable levels.

“Typically when we talk about nitrate concentrations, it’s in the spring and summer, not at Christmas, so we are now moving off the charts in terms of risk,” Des Moines Water Works CEO and General Manager Bill Stowe told Radio Iowa earlier this week.

Nitrate levels in the Raccoon River have set new records in each of the past four months, prompting Stowe’s utility to spend tens of thousands of dollars more for extra treatment of drinking water before it reaches customers’ taps.

“There’s no immediate danger to our customers,” Stowe said. “The water is safe to drink, but quickly it’s going to become unaffordable if we continue to see the kind of risks that policymakers are taking by pretending that volunarism is working.”

“I just think lawsuits are expensive and oftentimes counterproductive,” Branstad told Radio Iowa. “I would much rather see us try to work together to resolve these issues.”

Senate Democratic Leader Mike Gronstal of Council Bluffs on Wednesday said clean water is of interest to many legislators and that’s why they’ve been voting to provide state money to farmers who volunteer to plant buffer strips or devise earthen barriers to reduce fertilizer run-off and pledge to pay part of the cost of that, too.

“We have not even been able to meet the demand for voluntary conservation efforts in the state of Iowa in terms of cost share with the state,” Gronstal said during The Associated Press Legislative Forum at the statehouse.

But Gronstal didn’t denounce the lawsuit.

“Sometimes lawsuits seem like a waste of time and other times lawsuits become a mechanism to encourage action,” Gronstal told reporters.

The more than half a million customers of the state’s largest water utility get their drinking water from two rivers, the Des Moines and the Raccoon.

Tom Oswald of Cleghorn, the president of the Iowa Soybean Association, issued a written statement accusing Des Moines Water Works officials of being “sensationalistic at best and, at worst, dishonest” about water quality problems. He cited a recent study which concluded nitrate concentrations in the Raccoon River had decreased by nearly 25 percent over the past 15 years. The Soybean Association’s president said no one wants to pay more for water, but the state-of-the-art nitrate removal system is working effectively and “costs the average customer less than $1 per year.”