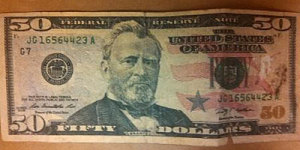 Fake $50 bill, according to police: “currency is discolored, quality of the bill is grainy, and ink is coming off the note”

Cedar Rapids Police have arrested 3 people on forgery charges. Police spokesperson Greg Buelow says officers were called to a convenience store on the city’s southwest side Thursday afternoon after a clerk identified a counterfeit $100 bill.

“The clerk, very alert, noticed that and got a description of the suspects as well as the suspects’ vehicle and provided that to police who, shortly after that, were able to initiate a traffic stop,” Buelow said.

In addition to charges of forgery, 2 of the 3 people are facing charges of possession of marijuana. It’s unclear — for now — if the suspects might be tied to roughly 20 other incidents of fake bills that have been found in Cedar Rapids this week.

“There are still reports (of counterfeit bills) coming in, so it’s possible that these individuals could be involved in other cases…it’s possible there could be other people operating out there as well,” Buelow said.

The three people arrested on Thursday are identified as 23-year-old Johnell Jones, 22-year-old Ranisha Wright, and 20-year-old Caitlin Coleman — all of Cedar Rapids.