You are here: Home / Health / Medicine / Iowa homes have a high risk for radon 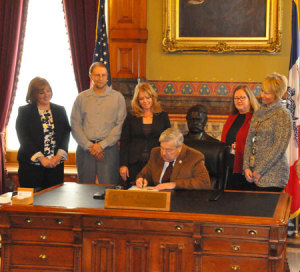 Iowa is believed to have the largest percentage of homes in the U.S. with radon levels above what the EPA calls “acceptable.” Mindy Uhle, with the Iowa Department of Public Health, says at least half of the homes in the state have an elevated radon level.

“Iowa’s designated as a ‘zone one,’ which means that we have a high risk for radon in a lot of homes in the state,” Uhle says. Radon is an odorless, colorless, tasteless gas that causes no immediate health symptoms, but long-term exposures may cause lung cancer. It comes from the breakdown of uranium in soil.

Uhle encourages all homeowners to purchase a radon test kit, which typically costs less than $20. “We would recommend doing that test every couple of years,” Uhle says. “Some people also like to do it after they’ve done major renovations or any kind of work in the home that might affect how air moves through the home.”

Radon gas typically seeps into a house under the home — through cracks in the foundation, floor or walls, and openings around floor drains, pipes and sump pumps.

Uhle suggests having a second test done if a first test shows high levels of radon in your home. Repairs to fix the problem are expensive. “It’s basically a vent pipe and fan system within the home to move the air around,” Uhle says. “It draws from underneath the foundation and then it vents it to outside of the building. That can cost anywhere from $800 up to $2,500, it really just depends how the air is moving under your home and where they’re able to pull from.”