You are here: Home / Crime / Courts / Branstad stresses ‘Together We Can’ theme with legislators (AUDIO)

Governor Terry Branstad is presenting what he calls a “plan of action” to lawmakers today.

Branstad delivered the annual “Condition of the State” message to legislators, with a “Together We Can” theme. Working together “matters” — Branstad said — since any bill must win approval in the Republican-led Iowa House and the Democraztically-led Iowa Senate before it reaches Branstad’s desk.

“Our strength comes from working together and our joint commitment to prudent choices for a better Iowa,” Branstad said to start the speech.

Many of the governor’s priorities are hold-overs from previous years, with a few some tweaks. Branstad proposes a new $5 million competitive grant program for communities or private sector companies that extend broadband service in rural Iowa. Ae he outlined during the campaign season, Branstad proposes a new 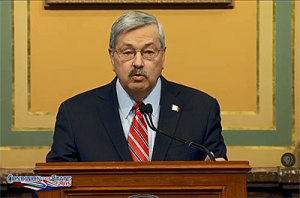 Governor Branstad delivers his State of the State address.

“IowaNEXT” program for “quality of life” projects as well as a new public-private partnership to manage state workforce development programs.

The governor said during his speech that it’s “common sense” for legislators to finally pass an anti-bullying bill, after similar proposals faltered in each of the last two years.

“This is the year we stand up to the bully,” Branstad said. “We can’t wait any longer.”

And he called for longer sentences and electronic monitoring of “habitual” domestic abusers.

“Together, we can accomplish this forward-thinking plan of action,” Branstad said of his package of proposals for legislators.

Branstad also released his budget plan today, outlining more than $7.3 billion in state spending. That’s between four and five percent bigger than the current year’s budget.  Branstad did not fully embrace the Regents plan to provide more state money to the public universities so in-state tuition can remain the same for a third straight year. He recommends Iowa’s public school districts get about $50 million more in general state aid for the next academic year. That’s an increase of 1.75 percent.