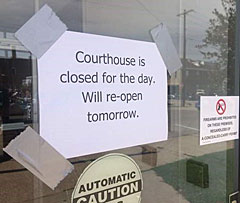 A legislator from Maquoketa — the site of a courthouse shooting this fall — says security measures at Iowa’s county courthouses should be a shared responsibility between state and county governments.

“Obviously we need to do something at our smaller courthouses to make sure they’re safe and secure,” says  Senator Tod Bowman, a Democrat from Maquoketa who is also a high school teacher.

Two of his students had been at the Jackson County Courthouse shortly before the September 9th shooting there. Another student had a parent in the room where the shooting occured — and then their school was locked down as a precaution.

“It became pretty emotional, to say the least,” Bowman says.

A man upset over his property tax bill went to a Jackson County Board of Supervisers meeting in September, pulled a handgun out of his briefcase and shot at the county assessor, but missed. The man was tackled and during a struggle a second shot was fired, killing the shooter. Entry into the Jackson County Courthouse is now restricted to one door and a sheriff’s deputy searches any briefcases or purses being brought into the building. Bowman says there’s no cheap way to provide security, because at the least it adds to labor costs, and he sees the state as a partner in shouldering some of that cost, perhaps in providing security training.

“I think there’s probably some opportunities for us to help them help themselves,” Bowman says.

Representative Gary Worthan, a Republican from Storm Lake, says it’ll be tough to find extra money in the state budget.

“That’s going to be a fairly dynamic discussion if we’re going to start talking about security in courthouses,” says Worthan, who is chairman of the House subcommittee that writes the budget for the state’s court system.

The chief justice of the Iowa Supreme Court raised the issue of courthouse security this morning during his “Condition of the Judiciary” message.