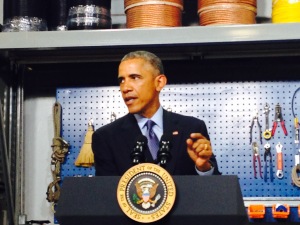 “Here’s what that means — your network is as fast as some of the best networks in the world,” Obama said. “There’s Hong Kong, Tokyo, Paris, and Cedar Falls. That’s the company you’re keeping.”

Around 200 people crowded into a garage at Cedar Falls Utilities to hear the president’s 20-minute long speech.

Obama said 45-million Americans lack access to high speed internet service and there are millions more who live in locations where there’s only have one choice for their broadband service.

“Today, in 19 states, we’ve got laws on the books that stamp out competition and make it really difficult for communities to provide their own broadband the way you guys are,” Obama said. “In some states, it is virtually impossible to create a community network like the one you’ve got in Cedar Falls. So, today I’m saying we’re going to change that, enough is enough, we’re going to change that so every community can do the smart things you guys are doing.”

Cedar Falls Utilities provides broadband and cable to the Cedar Valley, as it does water, electricity and natural gas. Obama is calling on the federal government to remove regulatory barriers to launching similar networks in other states. “If there are state laws in place that prohibit or restrict these community-based efforts, all of us — including the FCC, which is responsible for regulating this area — should do everything we can to push back on those old laws,” Obama said.

Increased competition, Obama said, will help improve broadband access and prices. “And the good news is we know it works because of you. You guys were like the guinea pigs on this thing,” Obama said. “You took a chance and you made something happen. And you’re supporting the jobs of the future through faster, cheaper internet. We want everybody to do that.”

The statement continues: “The President’s remarks combined with the selection of CFU as the venue for his speech clearly show that the White House wants to waste taxpayer dollars to supplant our Nation’s private sector broadband providers with government-owned utility companies.”