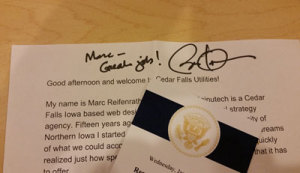 The president of a growing Cedar Falls-based Web development company was chosen by the White House to introduce President Obama as he stopped in the Cedar Valley Wednesday.

Marc Reifenrath was a junior at the University of Northern Iowa in 2000 when he and two friends launched Spinutech, Inc. “Today, Spinutech has clients in all 50 states and 8 countries,” Reifenrath said. “We now have a team of about 25. We work with Hy-Vee, Bridgestone Firestone, and Whole Foods — some larger, national brands that work with a little company in Iowa.”

The White House selected Cedar Falls as the site for President Obama to lay out proposals to make it easier for cities and rural communities to offer fast and cheap broadband internet.

Reifenrath credits Cedar Falls Utilities for part of Spinutech’s success. “In our early years, it would have been easy to move our headquarters to another city, but we didn’t, we stayed here,” Reifenrath said. “Thanks in part to its high speed internet, Cedar Falls has always made it easy for us to do our business.”

In addition to the Cedar Falls headquarters, Spinutech has an office in Des Moines. The 36-year-old Reifenrath said he was a little surprised to be contacted by the White House earlier this week. He learned he would be the person to introduce the president on Tuesday morning. “I was very honored, it’s kind of one of those once in a lifetime opportunities,” Reifenrath said.

Just prior to his short introductory speech, Reifenrath spent a brief time speaking one-on-one with President Obama. “He asked about the business and congratulated us on our success and he seemed to know a decent amount already, which was pretty impressive. He signed my speech, which was pretty cool. I told him he was more than welcome to stop by our office on his way out of town if he wanted to and he said, ‘yeah, I’ll have to do that sometime,’ so I take it as that’s a next time, maybe,” Reifenrath said, laughing.