You are here: Home / News / Ernst to deliver GOP response to Obama’s State of the Union address 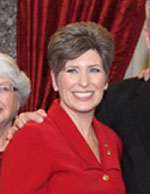 Iowa’s rookie U.S. Senator is getting a prime speaking slot next week. Republican congressional leaders have picked Iowa Senator Joni Ernst to deliver the Republican response to President Obama’s “State of the Union” address next Tuesday.

This is the first time GOP leaders have asked a first-year senator to speak in the prime time slot. Senate Republican Leader Mitch McConnell says Ernst understands that middle-class Americans want Congress “to get refocused on their concerns.”

The televised response to the president’s annual “State of the Union” speech is carefully crafted and has lately been used by whichever party does not hold the White House as a forum to showcase its future leaders. Senator Marco Rubio and Louisiana Governor Bobby Jindal have both delivered the Republican response during President Obama’s presidency and both are now considered possible presidential candidates in 2016.

In the spring of 2014 Ernst captured the attention of the nation’s political class with a campaign ad touting her hog castration skills.  She went on to win a five-person contest for the GOP’s U.S. Senate nomination in June, then she soundly beat Democrat Bruce Braley to win the U.S. Senate seat Democrat Tom Harkin had held for 30 years.