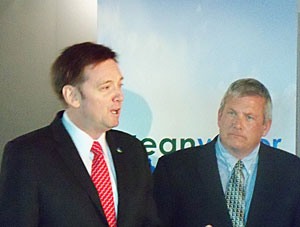 “We’re here to announce funding of IDALS project, the Iowa Targeted Demonstration Watersheds Partnership Program, which will receive $3.5 million from NRCS, which will be matched by an estimated contribution of $4.7 million from IDALS and other project sponsors,” Hanlin says.

He says Iowa’s award is impressive as all 50 states were in competition for the funding, with hundreds of proposals. “I’ve got to really compliment IDALS, again getting back to how many proposals were put forth nationwide, it was more difficult than getting into Harvard,” Hanlin says. Iowa Ag Secretary Bill Northey credited the hundreds of partners who put together the state project needed to secure the federal funds. “We are very fortunate, for there was a lot of vision in the water quality initiative work. It has been done over the last three years and I think set us up very well for this process,” according to Northey.

Northey says the projects will focus on watersheds where there is a high amount of nitrogen or phosphorus or both. “Often they are looking at cover crops, how do we increase the use of cover crops,” he explains. “Iowa right now, we’re guessing we have two or three percent of the land that gets cover crops on it. Some of these have a goal of getting 10 to 25-percent of the land in that watershed to get their cover crop participation levels up.”

Cover crops are planted to help keep the soil from washing away once the other crops are harvested. Cover crops for example can be planted in seed corn fields once they are harvested to protect the ground. Northey says other projects are looking at things like bioreactors. “That’s intercepting water in a tile line, running it through wood chips and being able to see a reduction in the amount of nitrogen coming out of that tile line,” Northey explains.

The Mississippi River basin is one of the areas that will be the focus of the effort. Northey says it’s important to keep the programs voluntary to allow each farmer to make the best choices. “We need to find things that work for farmers on the land. It’s very important for us to recognize — and it’s easy to forget — how different farms are from farm to farm. And how different farmers are,” Northey says. “I’m a part-time farmer, I can’t have as much time as some folks have. Some of them have newer equipment, some of them have older equipment, sometimes we have multiple families operating a farm, sometimes it’s rented, sometimes it’s owned, we’ve all got to find our place.”

The U.S.D.A. is also providing $2 million for a Cedar Rapids project to improve water quality in the Cedar River watershed.