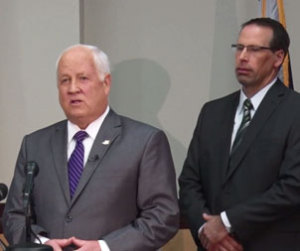 Part of the mystery of a multi-million dollar Hot Lotto ticket that was bought in Des Moines in 2010 and never paid off was revealed Thursday.

The ticket with a jackpot of more than $16 million was presented just hours before it was to expire in 2011 by a lawyer, but was not paid off after the lawyer refused to answer questions about the ticket purchaser.

The DCI released video in October of the purchaser from the convenience store where the ticket was bought and asked for help in identifying the man. DCI assistant director Dave Jobes says that helped.

“We received a strong response to our request. Hundreds of individuals competed the survey that accompanied the video, several provided tips for agents to follow up with investigations,” Jobes says.

Those investigations eventually led to an arrest Thursday and two felony charges. “Eddie Raymond Tipton, age 51 of Norwalk, Iowa has been arrested and charged with two counts of fraud,” Jobes says.

Tipton works at an Iowa Lottery vendor. “The allegations for these charges stem from his statutory prohibition on playing or winning the lottery. That prohibition is based on the nature of his employment with the Multi-state Lottery Association where he currently works as the director of information security,” Jobes says.

Jobes says they believe Tipton bought the ticket and then worked with others to try and cash it. Iowa Lottery CEO, Terry Rich was also on hand for the announcement of Tipton’s arrest. “We’re disappointed to learn that someone who has worked as a vendor for the Iowa Lottery has been charged in this case,” Rich says. “At the same time we are gratified that thorough procedures and protocols we’ve developed to protect the security and integrity of our games worked to prevent a payment of a disputed prize.”

Rich says this brings them closer to solving the mystery of the ticket. “This truly is one of the strangest situations in the history of lotteries. We believe this is the largest lottery jackpot ever to be claimed, only to have that claim withdrawn,” according to Rich.

Tipton was arrested and being held on a $10,000 bond. Jobes says the investigation into the mystery ticket is continuing with many questions still unanswered. The prize from the unclaimed ticket was eventually given away in another contest.