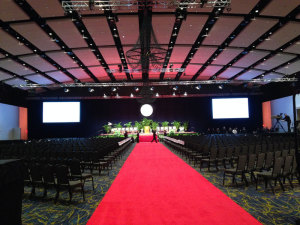 Site of the governor’s inauguration.

Governor Terry Branstad will formally start his sixth term as governor this morning.

More than 2,000 people are expected to attend Governor Branstad’s Inauguration Ceremony. The event will be held in a convention center in downtown Des Moines and there’s been a concerted effort to welcome Democrats in addition to Branstad’s fellow Republicans.

For example, the Iowa Democratic Party’s chairman will sit in the front row, next to the chairman of the Iowa GOP. A letter from Branstad that’s printed in the Inaugural program declares that the event is not about “any individual,” but is meant to be a “celebration of our state.”

Branstad said he learned a long time ago that with split control of the legislature, he’s got to be willing to work with both parties.

“What is it Ronald Reagan said? If you’re willing to give the credit to other people, you can accomplish a lot of things,” Branstad told Radio Iowa this week. “…That means I’ve got to be humble and willing to share credit with people that helped get it done.”

Branstad will set a national record if he remains in office until this time in 2016. He’ll become the nation’s longest-serving governor.

“Obviously I’ve been around a while,” Branstad said. “I love this state. I’m a lifelong Iowan except for my couple of years in the service and I want to make as big a difference as I can and leave the state in the best possible position.”

Branstad said his political success, in large part, is due to the work ethic he learned on the Branstad farm near Lake Mills.

“Growing up on a farm with the kind of responsibility you have at an early age I think really prepares you, plus you have to deal with adversity,” Branstad said. “I mean, when I was a kid, they never called off school because it was too cold and we’d have to go out and do chores and all of that and then go to school — and then come back and do chores again.”

Getting drafted into the military after he graduated from college was another formative experience.

“I came back with a lot more respect for what I had in Iowa than before I went in,” Branstad said. “I really did.”

The price tag for all the Inauration festivities, including tonight’s Inaugural Ball, will be about $400,000. However, Branstad’s Inaugural Committee has raised over $1.25 million and donors are aware most of that money will go into an endowment for college scholarships.

The first order of business at eight o’clock this morning will be the “commissioning” of 47 Iowans who will be declared “Honorary Colonels of the Iowa Militia.” Among the group: former Iowa Congressman Leonard Boswell and real estate developer Bill Knapp — both of whom are Democrats — as well as several current and former Branstad staffers.

The Inaugural Ceremony, during which Branstad will take the oath of office and deliver a speech, will begin at 9 a.m. and is scheduled to conclude about two hours later. New Jersey Governor Chris Christie, a likely 2016 presidential candidate, is scheduled to attend.