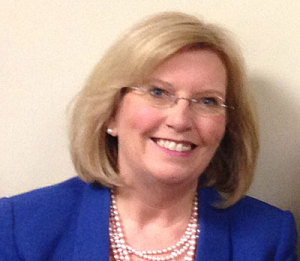 The Iowa Democratic Party’s 44-member governing board has elected a Des Moines doctor as the party’s new chairwoman.

“Thank you,” Dr. Andy McGuire said after winning the job. “We are great Democrats and we are going to have a great couple of years here. I guarantee it.”

McGuire was one of four candidates for the post and she won the position on the third ballot.

“We have much work to do. We have to build this party back up, have a successful presidential caucus in 2016 and towards the November elections after that,” McGuire said during a brief speech moments after the Iowa Democratic Party’s state central committee moved to make her election unanimous.

McGuire promised to be a “top-notch” fundraiser and to pursue a 99-county strategy.

“I am a doctor. I am the mother of seven. I’m a business executive,” said in her nominating speech. “I have the kind of strong leadership to take this forward.”

McGuire, who is 58 years old, is president of Meridian, a health plan for low-income Iowans. In 2006, McGuire was the running mate of Michael Blouin, a Democrat who came in second in the Democratic Primary for governor.

“We had this same strategy of trying to get to all corners of the state,” McGuire told reporters early this afternoon. “We raised a lot of money. We had a lot of activism and came darned close and so I think that’s helped prepare me for this.”

Her sister-in-law, Sheila McGuire, ran for congress in 1994 and also served as chairwoman of the Iowa Democratic Party in 2001 and 2002. Andy McGuire, who has been a booster of Hillary Clinton in the past, said she will not campaign for or endorse Clinton should Clinton run in 2016.

“Absolutely,” McGuire told reporters. “The chair has got to be neutral. That is just the way it is.”

Some in the party had complained that McGuire was the pick of the so-called “establishment” since she had the backing of the top Democrat in the state legislature as well as Congressman Dave Loebsack, the only Democrat who remains in Iowa’s congressional delegation. Others grumbled because she is from Des Moines.

“I think there is a valid concern that we are not doing enough in the rural areas in Iowa,” McGuire said in answer to a reporter’s question this afternoon. “…Now whether I’m from Des Moines or I’m from Mitchell County or I’m from Carroll County or I’m from Boone, that’s not important. What is important is that we recognize that problem and we build that grassroots organization.”

Jim Mowrer of Boone — the Democrat who ran unsuccessfully against Congressman Steve King in November — was one of the candidates for party chair, but he did not attend today’s meeting. Kurt Meyer of St. Ansgar, which is in Mitchell County, said he was eager to “dive in” as party chairman and implement some of the strategies he’s helped implement at the local level.

“If you want a grassroots party, you’ve got to tend to the turf,” Meyer said during his nominating speech.

Tim Tracy of Carroll was the other candidate for party chairman and he brought the house down during his nominating speech with this: “The squealing you’re hearing in Washington today are the Wall Street hogs that are trying to get their nose in the trough and get a hold of your money and we’re not going to allow that as Democrats.”

The Iowa Democratic Party’s new chairwoman said she hopes to work with Tracy, Meyer and Mowrer to rebuild the party. McGuire, who considered running for congress in 2014, says she is focused on her new role as party leader and will not be a candidate anytime in the next two years. McGuire replaces Scott Brennan, a Des Moines lawyer who stepped in on an interim basis 19 months ago after the party’s chairman at the time launched a campaign for governor.