You are here: Home / News / Paddlefish season to return to western Iowa rivers 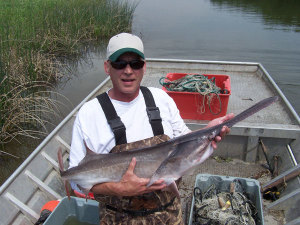 One of the stranger looking fish in Iowa waterways will once again be a target of anglers in March on the Missouri and Big Sioux Rivers in western Iowa.

DNR fisheries biologist Van Sterner says it will be the first time you can legally go after paddlefish on those two rivers since 1986 when fishing was cut off out of concern for their survival.
“The Missouri River has undergone a lot of changes over the last several decades with the channelization for commercial barge traffic, the construction of the reservoirs. The river experienced some very dramatic habitat loses and changes in habitat diversity and that sort of thing,” Sterner says. “So, the thinking back then was the paddlefish population would have difficulty, was in jeopardy, because of these changes.” 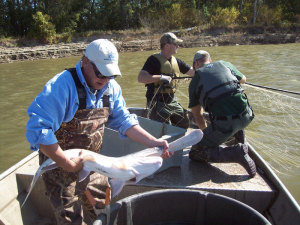 Adult paddlefish being checked by the DNR.

The fish has a flat front that looks kind of like a paddle “They are referred to by many as a spoonbill, it’s got a long nose or rostrum that measures out to 15 inches sometimes, it’s a scale less it actually has not bones as well, it’s skeletal system is all cartilage. So it is a unique looking fish,” Sterner explains.

He says the fish now found in the Missouri River will range between 15 and 20 pounds at a length of 30 to 40 inches.

There is a length limit on the fish. Fish between 35 and 45 inches have to be immediately released to protect their ability to reproduce. Sterner can’t say how the fish uses its unique nose. “Nobody knows for sure. There’s been some things speculated that it has something to do with finding prey species, speculation that it gives the younger fish some protection from predation by making them appear larger than they are, but nobody is certain,” Sterner says. 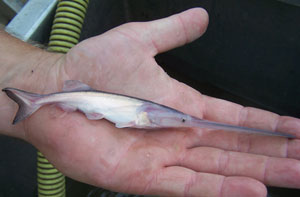 He says there should be some good areas of habitat for the fish. Sterner says the fish seek out deep and slow waters as they strain plankton from the water and often can be found in the calmer water behind the m

any wing dikes that line the Missouri River. It’s a unique fish and it’s not caught in the standard method of baiting a hook and tossing it in the water to wait for the fish to bite. “The method is actually snagging, where you pull a treble hook through the water hoping to actually snag the fish in the body, hoping to retrieve it that way,” Sterner says.

He says those who find a keeper paddlefish will enjoy a good meal. “They’re very good to eat, a good firm white flesh,” Sterner says. “When you clean this fish, there will be a little bit of red meat right below the skin, and you’ll want to trim that off and get down to the good white stuff.”

A special license is required for the paddlefish on the Missouri and Big Sioux rivers, but they can be caught on the Mississippi and Des Moines rivers without a license. Sterner says they learned some things about the fish through a program that tags some of the western Iowa fish.

“We put that into the lower jaw…part of it is for a mark and recapture population estimate, so recovering those tags is important for us actually getting a population estimate, it also gives us interesting information on movement. We’ve had tagged fish recovered down in Memphis, and also up in South Dakota. It’s a highly mobile, migratory fish,” Sterner says.

He asks anyone who catches a fish with a tag to report it to the DNR. The deadline to purchase a paddlefish license is January 31st.