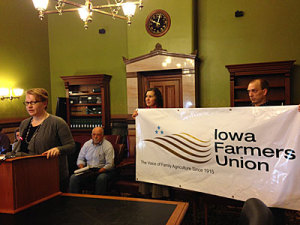 The Iowa Farmers Union is asking the Ag Department for advanced notice before pesticides are applied to row crops.

The Iowa Farmers Union is asking the Iowa Department of Agriculture to require 48 hour advance notice to neighboring farms before pesticides are applied to row crops. In addition the group wants enhanced penalties for pesticide applicators who are identified more than once as the source of pesticide drift.

“This issue has been on the radar with Iowa Farmers Union for several years and we’re more hearing all the time from our members that this is a growing problem that’s really affecting the bottom line for a lot of family farm operations,” Linderman says, “and it’s something that needs to be addressed within the agricultural community.”

Linderman cites research by the Practical Farmers of Iowa which found that between 2008 and 2012, less than 20 percent of pesticide applicators were fined after state investigators confirmed cases of pesticide drift had affected specialty crops. The average fine was $716.

“If you’re talking about somebody that is a known bad actor because they’ve done something particularly egregious, unprofessional and done it repeatedly, there should be a ,” Linderman says, “a disincentive for bad actors.”

Jordan Scheibel of Grinnell owns and operates Midway Farms, an organic vegetable operation that suffered a confirmed case of pesticide drift in June of 2013.

“As I checked over some seedlings in the field that evening, I noticed spots on many of the weeds, including a weed called amaranth or commonly pigweed in particular. They looked like the spots that might show up if you dripped bleach on a green shirt and then tried to wash them out,” Scheibel says. “As I walked around my half-acre field I found damage everywhere from tomatoes with their growth points completely bleached out to speckled heads of lettuce to spots on tree leaves hundreds of feet from the conventional cornfield where the drift had come from.”

The operator was cited for not following the recommendations on the pesticide label, but not fined. Scheibel says this isn’t just an issue for farmers raising vegetables or specialty crops.

“It affects livestock producers whose animals are at risk and row crop farmers who are organic or do not grow RoundUp Ready hybrids. These are not isolated incidents and no one is helped when they are swept under the rug or treated as collateral damage we have to overlook as an agricultural state,” Scheibel says. “It’s a serious economic, public health and legal issue.”

Kate Mendenhall, a beginning farmer from Spirit Lake, is also the Iowa policy coordinator with the Pesticide Action Network.

“Some of the most toxic pesticides are those that are the most drift-prone,” Mendenhall says, “and yet this common route of exposure and trespassing remains largely ignored, jeopardizing the health and livelihoods of rural Iowans.”

The Iowa Farmers Union filed a petition with the Iowa Department of Agriculture in December, asking that the agency adopt new rules for pesticide applicators. The agency has 60 days to respond. In 2013 abortion opponents used this same petition process to successfully get the Iowa Board of Medicine to ban doctors from remotely dispensing abortion-inducing drugs via a video-conferencing system.

In addition to its request of the Iowa Department of Agriculture, the Iowa Farmers Union is asking legislators to pass a bill requiring commercial pesticide applicators to obtain more liability insurance.