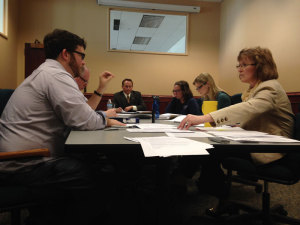 The Iowa Voter Registration Commission is moving ahead with plans to let all eligible Iowa voters with a state-issued photo I.D. register to vote online, but it will be up to the Iowa Department of Transportation to determine just when it can start.

Carol Olson, the Deputy Secretary of State in charge of elections, says DOT officials expect a new on-line voter registration system to be ready in the first quarter of 2016 — which means it may not be up in time for the 2016 Iowa Caucuses.

“That’s a possibility. We’re going to try to drive it faster than that,” Olson says. “We’re not completely in the driver’s seat on that, but we certainly aspire that it will be in place before that.”

Most Iowans are able to go online to renew their driver’s license and they can register to vote during that process, but the DOT is developing a separate system that would allow someone who either has a valid Iowa driver’s license or an I.D. card issued by the DOT to go online, enter their identification number and register to vote at any time, not just when they’re renewing their license.

“We don’t have the technological capacity. And why build a system twice?” Olson asks. “As stewards of the tax dollars, if we can build a system once and have the systems in the state departments talk to each other, that’s a much preferable way.”

The websites for the Iowa secretary of state’s office and for Iowa’s 99 county auditors will link to the DOT’s online voter registration system, once it’s up and running. Cerro Gordo County Auditor Kevin Kline says county auditors are already getting digital records from the DOT each day from Iowans who’ve registered to vote when they renewed their drivers license, “which is much faster than processing the same number of registrations on paper, so it’s secure. It’s been in place a long time. From the county auditors’ perspective, it’s a great process to to build on.”

The executive directors of the Iowa Republican and Democratic Parties are members of the Iowa Voter Registration Commission and this afternoon during the commission’s meeting both voted in favor of expanding online voter registration in 2016. Iowa Democratic Party executive director Troy Price is urging state officials to find other ways to offer online voter registration to the seven percent of eligible Iowa voters who do not have a drivers license.