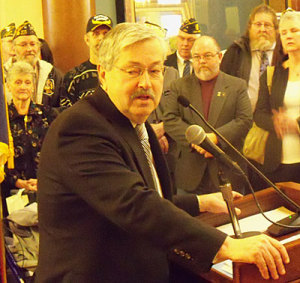 Governor Terry Branstad during an event at the capitol Wednesday.

Governor Terry Branstad says the state will look to other facilities to provide care if his proposal to close the state-run Mental Health Institutes in Clarinda and Mount Pleasant moves forward. The governor’s budget sent to legislators does not include any money to keep the institutions open past June 30.

“We had two mental health centers that were not accredited, we have no psychiatrist in Mt. Pleasant, the one in Clarinda is going to retire. So, we wanted to provide better services, and also we are going to work with the University of Iowa Hospitals. The governor says they want to use facilities that have the proper staffing to help patients. “We think we can provide better services to people with mental health issues with making this transition and not continuing those facilities where they’re not accredited and where we don’t have psychiatrists,” according to Branstad.

The idea is not favored by everyone, including Representative Dave Heaton, a Republican from Mount Pleasant. Heaton is chairman of the subcommittee that writes the budget for the Iowa Department of Human Services, the agency in charge of the Mental Health Institutes, and he’s arranged for the agency’s director to go to Mount Pleasant Saturday (January 24th) to explain the proposed closure to the community.

Five years ago a consulting firm hired by then-Governor Chet Culver recommended that the Mental Health Institutes in Clarinda and Mount Pleasant close, but Heaton and others worked to keep the institutions open. The Mental Health Institutes are routinely the treatment option of last resort for acute care of mentally ill patients. The governor’s budget indicates the state will save $15.5 million by closing the two facilities.

The MHI at Clarinda opened in 1888 while the Mount Pleasant facility opened the year the Civil War broke out, in 1861.