You are here: Home / Fires/Accidents/Disasters / Red Cross recognizes four who helped save a life in Le Mars 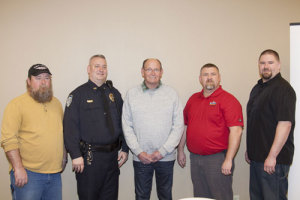 Four people credited with saving the life of northwest Iowa man last summer were honored Tuesday by the American Red Cross. Last July 2, Mark Ruba has just arrived at work at Wells Enterprises in Le Mars when he had a heart attack. A coworker, Randy Bock, started administering CPR.

“It was a skill that I hoped I’d never have to use, but fortunately, I knew how to do it,” Bock said. “It appears I did everything correctly…Mark is here with us today. I’m glad I had the training.” Bock had taken CPR training from the Red Cross.

At Tuesday’s ceremony, Bock was presented with a Certificate of Merit — the highest award given by the American Red Cross. “It was a shocking experience,” Bock said of the July 2 incident. “I’m just glad I was able to work through it, do what I needed to do, and remembered my training.” Dan Plueger of the Le Mars Police Department was also recognized for his quick response and lifesaving assistance.

Plueger used an Automated External Difibrillator to help revive Ruba. He “shocked” Ruba three times with the AED. “At that time, we still didn’t have a pulse and the ambulance crew took over and loaded him up. I believe they shocked him one more time on the way to the hospital while they continued CPR,” Plueger said. “It wasn’t until they arrived at (the hospital) that they were able to get a pulse on him.”