You are here: Home / Education / Author who calls for studying slavery reparations speaks in Iowa 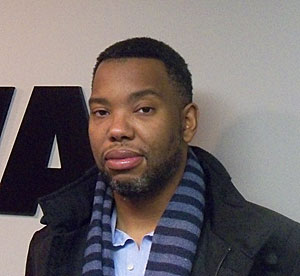 A national correspondent for “The Atlantic Magazine” who gained attention for an article calling on the United States to study possible reparations for slavery was in Iowa this week to speak at Grinnell College’s Martin Luther King Junior Day events.

In an interview with Radio Iowa, Ta-Nehisi Coates says the idea of reparations for slavery is as old as the country itself. “Immediately after the Revolutionary War you had black people who had been enslave by the British making that argument that post-colonial, not really colonial government, reclaimed the property of British slave holders that African Americans who had been enslaved and had helped contribute substantially to that property were owed reparations,” Coates says.

He says he was always aware of the idea, and really started thinking about it around two years before the published article “The Case for Reparations” in June of 2014.  Coates says as he looked deeper into the issue he found the problems created by slavery went on well after President Abraham Lincoln freed the slaves. “One of the first thing people say about reparations was ‘anybody is owed reparations is long dead.’ But there is a fairly good claim that can be brought up at least into the mid 20th century, perhaps even further, on behalf of people who are very much alive today dealing with reparations,” according to Coates.

He says he believes there is a “tremendous gulf between White America and Black America” that has not been addressed. “And we’ve tried all sorts of various means — except directly addressing the problem — directly addressing the gulf, admitting to the fact that the gulf is not there by magic, it didn’t just appear for no reason, and we made the gulf through our policies and our decisions,” Coates says. “Throughout our history we made a decision that we wanted there to be a gap , and just as we made that decision to make that gap, I say that we have a responsibility to unmake it.”

Coates has no idea how to get rid of the gulf, he says the purpose of the article was to make the case that it is something worth studying. He says when you mention reparations now, “people bust out laughing.” “The first thing is to get people to admit that there is in fact a chasm there and that it is the result of actual policies and decisions that were made, that there is an actual debt. And then we can talk about how to service the debt after that,” Coates explains. “In terms of where we are in terms of our conversation in this country, we won’t even admit that there is a debt yet.” Coates tries to explain how the polices and decisions have led to the problem.

He says African-Americans also have a large number of people who have not enjoyed access to credit to buy homes. “If you are looking to hawk a sub-prime loan, African-Americans are the prime audience for it because you have all the people, all your likely customers centered in a particular place. And we have to ask why are those people there to begin with? Well they are there because we had housing segregation for a good part of the 20th Century,” Coates says.

Coates says the idea of studying those issues has been put forward in Congress, but has never been taken seriously. “For probably I guess about 25, 26 years, Congressman John Conyers (Michigan) has introduced a bill into the House of Representatives arguing for a study on the affects of slavery, enslavement and everything that came after enslavement, it’s ensuing legacy and it’s affect on African-Americans and decide if reparations are owed and how they might be done,” according to Coates. “Regrettably H-R-40, that’s the bill’s name, has never picked up any traction under the Republican majority or the Democratic majority. So it’s there, it’s there waiting for us, somebody just has to decide hey this is a serious thing and we need to move forward.”

Coates believes we could study the issue and figure out a solution like Americans have with other big issues. “I am certain we can, certain we can, we are the country that invented the atomic bomb, we’ve have all these great engineering miracles, we are the country that engineered this great Social Security thing, Medicare, all the things that we’ve done,” he says, “we’re supposed to be the greatest country in the history of the world. If we are, we have the responsibility to live up to that billing. So we can get this figure out too I think.” Coates says the impact of studying and dealing with reparations would be “gigantic.”

He says one of the first benefits is the country would not have to go through what he calls “theater” that happens in the cases like those of Eric Garner, a black man who was choked to death by white police officer. “This just theater that does not actually get at the root of the problem, that’s the first thing,” Coates says. “But the second thing, I think this is the big, big deal. An America that accepts reparations is a very, very different America. Its a much more historically aware America, it’s a much more frankly, deeply patriotic America. Because it’s not just an America that embraces patriotism when it’s time to wave the flags and fire up the grill on the Fourth of July. It accepts its heritage in its entire totality.”

Coates says that type of America would have a big impact on all of our politics. He says the country would be more “politically aware” and the impact of that awareness would not just end with dealing with white supremacy and racism. Coates isn’t jumping up and down and saying “do this now”, but he believes it is an issue that has to be addressed for our children and grandchildren.

“It took the United States almost 250 years, to really get to a point where all of its citizens were empowered. And we are always fighting even today to make sure that is the case,” Coates says. “So it’s not so much that we have to have the idea right now and then the solution has to come tomorrow. The ideas are put out there and hopefully at some point society gets enough integrity, enough courage to do the right thing.”

You can read his entire article here: www.theatlantic.com/features/archive/2014/05/the-case-for-reparations/361631